This motto clearly articulates St. Maximilian Kolbe’s belief that as a Catholic community we are called to make choices that affirm our Catholic mission to be socially responsible and of service to others. The school affirms its commitment to lead young women and men to a deeper appreciation of the presence of God in our lives and in our decision making. 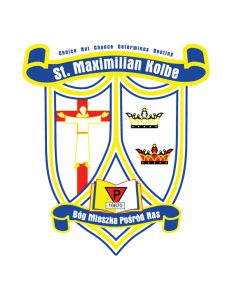 The school crest was created by a compilation of work from four different student artists from our associate schools. Jordan Weir from Our Lady of Grace Catholic School, John-Salvatore Falcone from St. Joseph, Aurora, Kaitlyn Balkovec and Victoria Garritano both from Cardinal Carter all contributed to the final crest.

The shield is divided into three compartments symbolic of the Holy Trinity. The first triad contains the Franciscan symbol of St. Francis on the cross showing the stigmata – St. Maximilian Kolbe belonged to the Franciscan order of priests. The second triad contains the two crowns which are symbolic of the apparition. As a child Kolbe had a vision where our Holy Mother appeared to him offering a red crown representing martyrdom or a white crown representing purity and to choose one. St. Maximilian Kolbe chose both crowns which are symbolic of how his life was lived. The third and final triad contains a book which represents the Holy Scriptures, the Bible, the Word of God revealed to humankind. It can also represent the whole world of learning and academics. The school motto is emblazoned at the top of the shield. Finally the crest is supported by the powerful statement in Polish – “Bóg Mieszka Poród Nas” which means God is among us.

Prior to our school opening, there were several initiatives that were aimed at helping us to create our identity as a new school. The cornerstone committee was formed in September 2008 to act as an advisory body to the Principal and communicate various initiatives to the rest of the learning community. This committee was responsible for the creation of the school crest, school insignia, and athletic mascot. The committee has advised the principal on decisions around uniform and caterer options for the school cafeteria. Finally, the group also helped provide input into value statements that were later developed by staff.

At Christmas, the founding Principal, Mr. Domenic Scuglia learned that a priest by the name of Father Lucjan Krolikowski worked alongside St. Maximilian Kolbe during World War II and was still alive and living near Boston in Chicopee. In March, a group of students travelled to Chicopee Massachusetts to visit with Father Lucjan to learn more about our patron saint. The following week, a different group travelled to New York City to participate in a workshop at the Museum of Tolerance. The trip funded by the Simon Weisenthal center for Holocaust Studies’ was a life-changing experience for the entire group. Finally a third group travelled to Poland to follow in the steps of Saint Maximilian Kolbe including visiting the City of the Immaculata in Warsaw and Auschwitz outside of Kracow where Kolbe later died. All of these experiences have helped lay the foundation and culture of acceptance and inclusion for everyone in the school.

* In addition to English program